3 Weapons Charges That Are Felonies Under Delaware Law 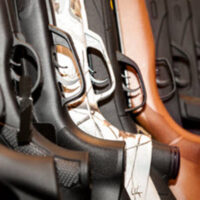 Though you may not know the specifics about Delaware weapons charges, you are probably aware that crimes are generally classified as a felony or misdemeanor. The latter offense is less serious, and each of the three classes in this category are punishable by less than a year incarceration if convicted. A judge could also order a fine up to $2,300 for a Class A Misdemeanor weapons case, such as carrying a dangerous weapon or selling a switchblade knife. However, the statutes on firearms and deadly weapons also cover many different crimes that are treated as felonies. The charges are more severe, leading to longer prison sentences, higher fines, and other implications.

Because the stakes are higher, it is crucial to retain experienced legal representation if you were arrested for a felony. A Wilmington weapons charges attorney can assist with:

Delaware is a “may issue” state for purposes of concealed carry; without the proper license, it is illegal to have a firearm or other deadly weapon on your person. There are two levels of felonies outlined in the statute:

Possession and Purchase by Prohibited Individuals

Delaware imposes restrictions on who can purchase, own, possess, or control a deadly weapon. You may be aware that an individual convicted of a felony is a prohibited person, as is someone who was adjudicated as a delinquent for an offense that would have been a felony for an adult. Anyone who is subject to a domestic violence protective order is also forbidden to possess a firearm until resolution of the case.

A violation of this section is a Class F Felony, for which a judge could sentence you to three years in prison. However, you could face Class C Felony charges if you were previously convicted of a violent crime. A mandatory minimum sentence applies, but the maximum is up to 15 years’ imprisonment.

Possession of a Destructive Weapon

Certain items and forms of ammunition are prohibited unless you are a member of law enforcement or the military. It is a Class E Felony to possess, sell, or transfer:

A conviction could mean up to three years in prison if convicted.

These penalties are harsh, but keep in mind that they only apply to a conviction. For more information on potential defenses, please contact Attorney Michael W. Modica at 302.600.1262 or via our website. We can set up a consultation at our Wilmington, DE office to review your circumstances and discuss ways to fight weapons charges in Delaware.