Can I Face Delaware Assault Charges For A Bar Fight? 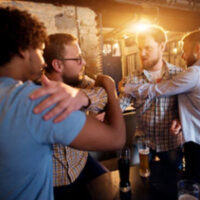 In short, yes you can be arrested for getting into a bar fight and probably will when owners call police. These scenarios are usually covered by Delaware’s statute on Assault in the Third Degree, i.e., intentionally or recklessly causing physical injury to another person. The offense is a Class A Misdemeanor, so you could face up to a year in jail, a $2,300 fine, or both. However, if you cause “serious” injuries that create a risk of death or cause severe bodily harm, you could face charges for Assault in the Second Degree. As a Class D Felony, your prison sentence could be up to 8 years.

Still, being arrested is not the same as a conviction. There are multiple defenses to assault, and one of them is familiarly known as “mutual combat.” Therefore, a bar fight could form the basis of an effective strategy for beating the charges or obtaining another favorable outcome. You will need assistance from a skilled Wilmington assault crimes defense attorney, but a summary is useful.

Mutual Combat as a Defense

Whereas assault involves one person causing bodily harm to another, the charges are not as clear when two adults willingly fight. Mutual combat covers scenarios where the individuals engage in a physical altercation intentionally, often because of a sudden quarrel or heated circumstances. They purposefully attack each other and, in doing so, are consenting to the bodily harm that befalls them. A prosecutor would face significant challenges getting a conviction based upon the essential elements of assault, so mutual combat serves as a defense.

Comparison to Self Defense

The tricky part about mutual combat as a defense to assault is that the circumstances can quickly transition into a situation of self defense by one combatant. As soon as one person calls the fight off, offers a truce, or otherwise indicates an intent to end the fight, the mutual combat defense is no longer available to the other individual.

Application of the Mutual Combat Defense

The bar fight is a common example of how the mutual combat defense could support the defendant’s position, but there are others. For example:

For more information on defending assault charges in Delaware, please contact Attorney Michael W. Modica. You can schedule a consultation at our offices in Wilmington, DE by calling 302.600.1262 or visiting our website. After reviewing your circumstances, we can discuss possible strategies at different stages of your case.