Weapons Possession During A Felony In Delaware: Prosecution’s Burden 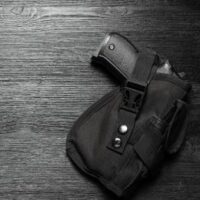 Weapons laws in the US and Delaware are generally based upon three factors: Who you are, what type of weapon, and how you were using it. For example, the “who” focuses on those individuals that are prohibited from having a gun, and there are detailed definitions on the “what” with respect to dangerous weapons and firearms. The “how” enters the picture with respect to specific conduct: Delaware criminal statutes criminalize weapons possession during commission of a felony, and the penalties can be severe if you are convicted.

However, you can only be convicted if the government meets its burden to prove guilt beyond a reasonable doubt. The prosecution must also be able to overcome any defenses you present, which could chip away at the government’s case. A Wilmington weapons charges attorney will protect your rights with respect to all angles of the case, though it is helpful to know the basics of the prosecutor’s burden.

What the Prosecution Must Prove: The government has certain essential elements, or sets of facts, that it must prove beyond a reasonable doubt. With this particular weapons possession charge, the important factors include:

Penalties for Weapons Charges: If the prosecutor meets its burden of proof and you are convicted, the judge applies punishment for a Class B Felony. The judge must sentence you to the mandatory minimum of 2 years in prison, but the maximum is up to 25 years’ incarceration. When convicted of possessing a gun during commission of a felony crime, the mandatory minimum is 5 years.

There are two important points to keep in mind with being convicted for possessing a deadly weapon or firearm while committing a crime.

Knowing the harsh penalties for a conviction, you can see that retaining experienced counsel is critical to fight charges of weapons possession during commission of a felony. To learn more about defense options, please contact Attorney Michael W. Modica. You can schedule a consultation at our Wilmington, DE office by calling 302.600.1262 or going online.